MAIDEN POLE, ANOTHER 'IF ONLY' RACE, BUT WE TAKE CHAMPIONSHIP LEAD 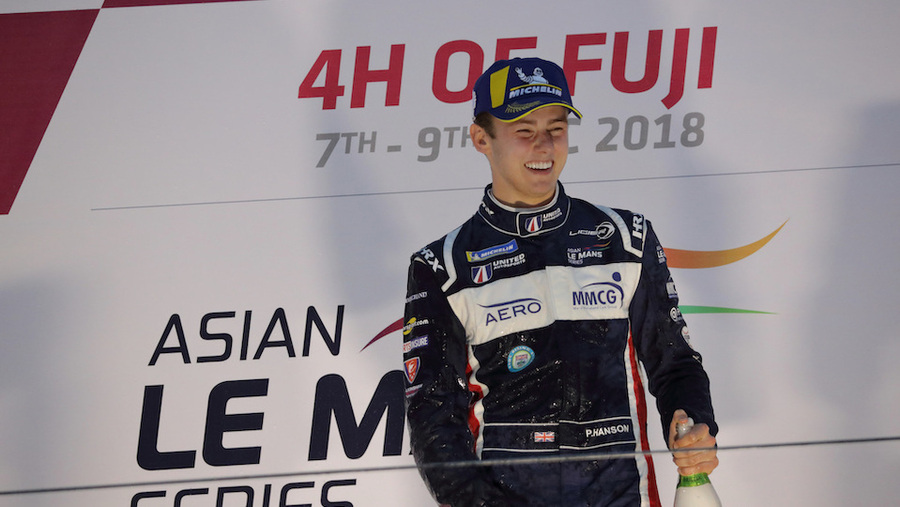 Well, where do I start – I guess from immediately after the opening Shanghai race, where I did some ‘touristy’ stuff. I went to see the Great Wall of China which was quite a spectacle and then spent some time in Tokyo when I arrived in Japan. I watched sumo wrestlers training – that was very different (!) – and went up the Tokyo Tower. There are many interesting districts in Tokyo, showing off Japanese cultures, and it was great chilling out there – it’s a fantastic city.

Looking back now, I think turning up to drive the Ligier JS P2 at Shanghai was easier than how the Fuji event started out. I’d never raced at Shanghai so I was straight on it in a LMP2 car. But I’d raced once before at Fuji, in December 2016, racing a Tockwith Ligier JS P3 and definitely on Friday, in the test session and Free Practice, I was still getting my head around the LMP3 car’s reference points around the Fuji Speedway circuit. Things like the braking points were in the back of mind from two years previous.

That said, I set the quickest time in the morning test – and while I was P2 in FP1, that morning time was the quickest of the day so I couldn’t have been doing too much wrong!

Friday was actually a really good day from a team perspective. The balance of our Ligier was very good and United Autosports must be congratulated for giving Paul and I a good car straight out of the box – it was a case more of me having to adapt to a LMP2 having raced there in a LMP3. Starting off well means you can just spend time fine-tuning on elements for the race and you’re not chasing a decent set-up on the first day.

Paul began FP2 on Saturday morning which was noticeably colder than the previous day. I did a qualifying sim[ulation] and posted the fastest lap. The car felt well-balanced and I was really happy going in to qualifying that afternoon especially considering our #22 Ligier was quickest in the test, second fastest in FP1 and quickest again in this session.

In qually I had a small lock-up on my first run so pitted for new rubber and nailed it to claim my first-ever career LMP2 pole on only my second qualifying attempt. That was very satisfying and much of that down to my regular ELMS co-driver Filipe Albuquerque.

There was precipitation on the grid come raceday, almost like very light snow, and it was so cold. As normal, I’d take the start – my first time ever beginning a sportscar race from pole. My 2.5hr was tricky. I lost some ground as the red lights went out on the rolling start and Harrison Newey went around the outside of me at Turn 1 from his front row position. His #24 Ligier seemed quicker than me in the opening laps but I clawed some time back, despite the slower traffic, so that I was only just over three-seconds behind.

It started to rain pretty heavy with almost an hour on the clock and the United Autosports guys made a great call by bringing me in for wets – crucially a lap before Harri came in. With an hour gone I was almost 10secs ahead and at mid-distance I’d stretched that out to over 26secs with 68-laps on the board – I felt really comfortable with the car and very happy especially as we had never tested the JS P2 in the wet.

The #24 boxed earlier than me for slicks as the track dried. Advantage Harri who was catching me, taking big junks out of my lead, my worn wets no match for his new slicks on the now dry track. The problem was that I couldn’t pit for another six or seven crucial minutes. It may have appeared a strange decision for those of you watching the race on the internet but our hands were tied – we didn’t make any kind of mistake. Paul, being a platinum graded FIA driver, can only do a maximum of 90mins in the car. If I’d pitted when Harri did to hand over the car to Paul, it would have meant I needed to get back in again near the end of the race when Paul reached his maximum time limit. We’d have lost even more time with an additional pit-stop so I just had to do my best and not lose too much time until I reached my 2.5hr minimum drive time, of course it was frustrating but we were powerless to react.

With an hour to run Paul was 20secs down on the #24 but made his last stop, for fuel only, during a Safety Car period and was queued immediately behind the #24 when the race went green again with 26mins remaining. For the first couple of laps, Paul put pressure on the #24 but each time he got close for an attempted overtake, it affected the United Ligier’s handling, crucially losing front end grip.

Unfortunately we had to settle for second place, having led almost 60 of the 140-laps, but the bonus was that we took the overall series lead at what is the halfway mark in the championship. It’s only by three-points but I’ll take it!

Christmas and the New Year are next up, time to spend some quality time with family and friends, before the third and penultimate round of the Asian Le Mans Series race at Buriram in Thailand in January. It’s a track I’ve been to previously so I guess I’ll be re-evaluating my braking points again there too but it’s something I must get used to. Thanks for the support.

“We had to settle for second place, having led almost 60 of the 140-laps, but the bonus was that we took the overall series lead at what is the halfway mark in the championship. It’s only by three-points but I’ll take it!”

LOOKING AHEAD, AND BACK, ON A HIGHLY SUCCESSFUL SPORTS-PROTOTYPE CAREER