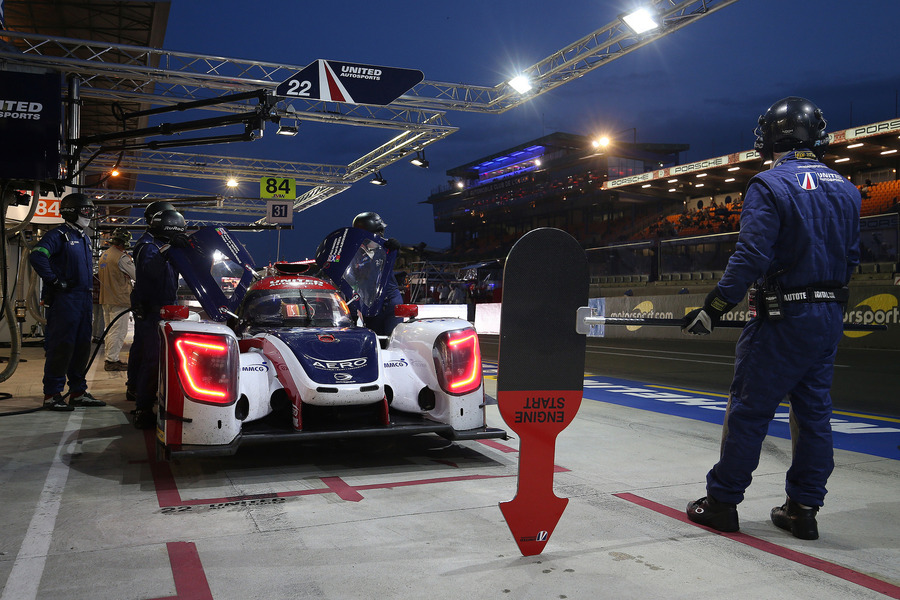 This week didn’t get off to the best start unfortunately as Paul (Di Resta) and I landed quite late on Monday and almost missed our scrutineering spot. I was flying out from London with Paul and his flight was delayed from Canada after the F1 race (where he was commentating for Sky Sports) so we had to push back our flight. Then, due to weather, we had to divert to a different airport which meant we were even further away from Le Mans and then had to drive the last leg by car!

We literally managed to rush into scrutineering at the last minute and have photos taken before the heavens opened again - 10 secs longer and we would have been drenched! So not the ideal start to Le Mans week, plus I’d picked up a cold from somewhere!

That pretty much set the scene for the rest of the week as all the testing has been a bit of a rush really, what with many red flag stoppages, spins and slow zones. We managed to get quite a bit of running in on the Wednesday afternoon and evening but unfortunately the track wasn’t the best, so I went out at the start and never really went back out. Also, when it came to the night session, I was on a degrading tyre which knocked my confidence slightly especially after having such a positive test a couple of weeks ago.

However, last night was definitely an improvement, even though the first session was marred by slow zones and red flags again. But by the end of the session, in the night, my confidence came back up when I was putting in some good lap times. I also did a few laps in light rain close to midnight, which was good experience.

Overall I’m happy with the car at the moment and eager to start the 24 hour race proper tomorrow, but first we have the Driver's Parade around the town centre and I’m late. Must dash!

Last night was definitely an improvement, even though the first session was marred by slow zones and red flags again. But by the end of the session, in the night, my confidence came back up when I was putting in some good lap times. I also did a few laps in light rain close to midnight, which was good experience.

Busy day on the track today! Kicking off with 4 hours of @24hoursoflemans practice followed by the opening session of qualifying 😃🏁@UnitedAutosport #LeMans24
Scrutineering done and dusted yesterday in the city centre. Back on track tomorrow #LeMans24 Here's all the (local) timings for @FIAWEC Wed: 4pm-8pm FP; 10pm-12am Q1Thurs: 7pm-9pm Q2; 10pm-12am Q3Fri: 5:30-6:30pm Drivers Parade Sat: 9am-9:45am; 3pm 24 hours of Le Mans
✅Admin and meetings done💤Now time for some rest before hitting the #LeMans24 track for the only chance we’ll have to get some laps in prior to race week.Here’s the timings for @FIAWEC testing tomorrow⏰9:00am - 13:00pm ⏰14:00pm - 18:00pm@UnitedAutosport #BeUnited
⏰Up bright and early for admin checks & briefing for @24hoursoflemans with @PaulDiResta and @AlbuquerqueFil Can’t wait to test the #22 on the track tomorrow! @LigierAutomotive @UnitedAutosport #BeUnited #LeMans24
📍Arrived in Le Mans! 🇫🇷Finally got that #FridayFeeling Absolutely buzzing for a busy weekend at @FIAWEC @24hoursoflemans #LeMans24
Just seen the video from our outing at #LeMans24. The end result definitely didn’t reflect our form. @AlbuquerqueFi @PaulDiResta. Great experience! #betterlucknexttime https://t.co/IPjASkUqnr
camera_alt +88
Previous Article